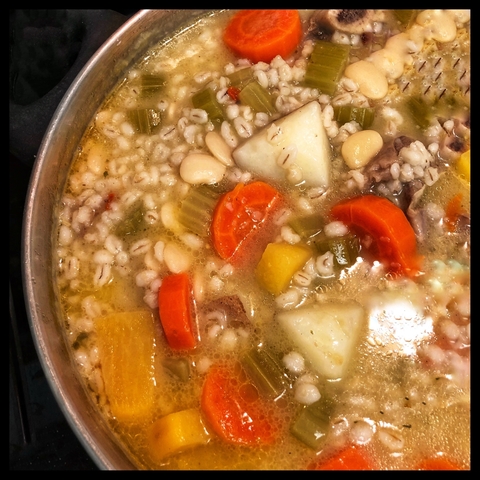 Comfort in a bowl and it will be on my supper table tonight! This soup is so hearty and is a favorite in most households that I know.

My family likes the soup thick so I add extra pearl barley to it. Make sure that you use a larger stock pot because the soup thickens and when you reheat it the next day, you will need to add more water to it.

This is such a hearty soup, a real meal in one bowl! You don’t have to use meat in the soup if you don’t want to, and then it could be a great vegetarian soup. Either way, it’s delicious and just what’s needed as our weather is getting colder and our bodies want warmth.

Bean and Barley Soup with Flanken

Directions:
Place the meat into a large soup stock pot and then fill with water, leaving a few inches at the top. Bring to a boil, and skim the top where the foamy scum has formed. Once the water is clear and there’s no more brown stuff surfacing, remove the meat and clean the pot. I make the meat ahead of time and refrigerate (covered) until it’s time to make the soup.

Add the meat back to the pot along with the packages of the soup mix (keep the seasoning packets for later), extra pearl barley and the vegetables. Add water, bring to a boil and then lower the heat so that the soup simmers. Let simmer for 2 hours, uncovered, stirring occasionally. If the soup is very thick, add water as needed and stir.

Add the seasoning packets and then simmer for another 10 minutes. Let cool before putting it in the fridge. The next day, skim off the top layer of visible fat before reheating on low. The soup will be extremely thick, so add water and stir until desired consistency.